Team building exercises and fun school, or party games can include using a rope or cord. Several of these games can include large groups of people or a small group of friends depending on the size of the event. They are also an amazing ice breaker for clubs, volunteer groups, or workplaces that have new people or work with camps and moral boosting organizations.

When thinking about rope games, the first one that comes to mind is tug of war. This popular game can be played with 2 to 10+ players. In a typical game there is an even amount of people on each side of the rope, and a marker in the middle to show which team has gained more footage when each team starts to pull. Once the marker crosses a line the team who has the marker on their side wins. Tug of war can be played with different kinds of rope, but manila is the most popular. You want to make sure you have a rope that is strong enough to hold up against the tugging of each team, and that will best suit the amount of players in the game.

Human knot is a fun ice breaker/building exercise. The easiest way to get this game started is to have a simple knot or tape marking different parts of the rope for each player, and every spot is evenly spaced apart. All players will grab a rope when it is laid in a circle and then trade their part of the rope with someone else in the group that isn’t adjacent to them. Once everyone is holding on to their traded part of the rope, they must work together to untie the knot. For more difficulty, the teammates may be blindfolded or not allowed to talk until the human knot is untied. These games work better with thinner ropes that have a small diameter of 1/8 inch or less.

Another great team building game is the rope game, which is when overhand knots are tied about two feet apart from each other for every person playing the game. Everyone selects a knot and holds on to the rope right beside the knot of their choice. After everyone has their knot, the team must work together to untie all of the knots without letting go of the knot/part of the rope that they are holding. Each person must only use their one hand to help out there teammates as well as get their own knot untied. 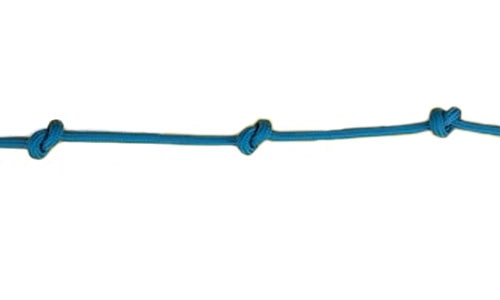 A more complex game of tag that includes rope is rope race. This game can include laying rope down in connecting circles, squares, or lines that connect in several areas. Someone is chosen to be the tagger and has to tag another one of the players, but there’s a catch, the tagger and other players can only run on the rope lines and can’t push or pass other people. If you run off of the lines, you are automatically the tagger. When someone gets tagged, they are now the tagger until they catch someone else. This game can also be played by having one tagger at the start, and when someone gets tagged, they also become a tagger. The last person left to be tagged would then be crowned the winner of the game.

Helicopter is a fun game that is simple to play and only needs one rope that is relatively long in length. A thicker cord that isn’t too heavy works best for this game. One person stands in the middle with the rope, while the other players stand about 5 - 10 feet away in a circle around the center person. The player with the rope will place the rope on the ground in a straight line and start to go in a circle. All of the players have to jump over the rope when it gets to them.